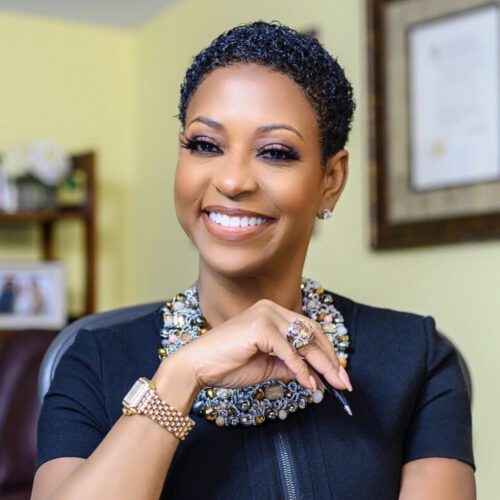 Elite Executive National Sales Director Gloria Mayfield Banks is an internationally renowned motivational success strategist and sales trainer, who has consistently beaten the odds to achieve extraordinary success. Gloria holds a Bachelor’s degree from Howard University, an MBA from Harvard University and an Honorary Doctorate from University of Maryland Eastern Shore. She has built a multi-million-dollar enterprise, as an author, a founding partner of Charisma Factor, Inc. (a corporate event planning company), and as an Elite Executive National Sales Director with Mary Kay, Inc. Out of 3.5 million women in Mary Kay, Gloria has ranked #1 in North America since 2016. These accomplishments provided the foundation for her recently published book, Quantum Leaps, with ten specific steps to help you soar.
With her high energy and inspirational teaching style, Gloria is best described as “Energy in Motion!” Dr. Banks has trained professionals on six continents to achieve new levels of success.
She is expressly passionate about working with winners to actualize their full potential. She was a featured as one of the world’s top entrepreneurs at Grant Cardone’s 10XGrowth business conference. In addition, she has shared the stage twice with Oprah Winfrey speaking on, Empowering Women and Girls for Leadership and at the N Street Village foundation fundraiser to help homeless women.
Dr. Banks shared her secrets of success with national media audiences, appearing on CNN with Soledad O’Brien, ABC-TV, and CNBC with Donny Deutsch on “The Big Idea”; and has been featured in Fortune, Black Enterprise, Glamour, and Ebony Magazines. Dr. Banks has also received numerous awards and national recognition. Harvard Business School documented Gloria’s success in a case study titled, “Gloria Hilliard Mayfield at Mary Kay Cosmetics.” Gloria was also identified as one of “Five Women of Color to Watch in 2018,” by Forbes magazine.
She resides in Baltimore, Maryland with her husband Ken Banks. They share four adult children.
Connect with Dr.Gloria Mayfield Banks on the web at www.GloriaMayfieldBanks.com

All Sessions by Gloria Mayfield Banks