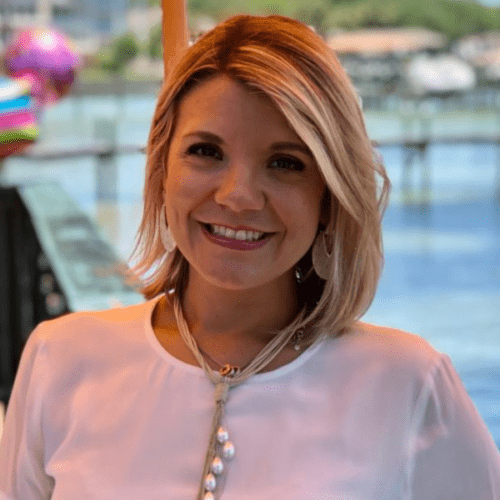 “If you’re the head of the class, you’re in the wrong class. Surround yourself with people who make you want to be better.”

THINK BIG. “Why not?” is the question Independent National Sales Director Amy Allgood asks herself and those she influences. The Audacious Allgood Area has it in their DNA. Amy says, “The women are big thinkers and I want them to beat my record. I don’t want them to stay comfortable or they won’t realize their greatness. I want them to take more risks so they’ll discover how amazing they truly are!”

Amy Allgood has that kind of belief because it was breathed into her from an early age. “My mom built my self-esteem by making me believe I could do anything I wanted to do. My dad was a coach and I think I learned my encouragement style from him. They both influenced my drive to win and be the best. Success is hidden in your daily routine! The practice and effort are not glamorous or fun, but the consistent, everyday discipline is what makes you successful.”

“Success is not convenient. I was an adoptee and hungry to learn. So, I drove one and a half hours to Dacia Wiegandt’s weekly success meeting. I saw myself at the top and surrounded myself with a strong inner circle,” Amy explains.

It seems apparent that Amy Allgood sticks with those who believe in her. She and her husband, Will, were married one month after she debuted as an Independent Sales Director. Amy says, “He was the only one who said, ‘Go for it!’ when I first started.” That union of two has blossomed into five, with daughters Carilyn and Sawyer and son, Carson.”I always saw the bigger picture and focused on what to do to get there,” Amy says, “but the picture I had for my future family was a driving force, as well. Now, I am creating a legacy for my family and I’m the change agent,” she says.

A change agent in Amy’s life was her Independent Senior National Sales Director, Mary Diem. “I didn’t think I was smart, so I overcompensated by working very hard. Until about two years ago, I never really believed it, but Mary would tell me how smart and wise beyond my years I was. She gave me permission to be true to myself. She knew how to motivate me. She built me up and spoke my language. You see, we’re making an impact on souls and want to be one of the next generation of Mary Kay leaders to pass it on,” Amy explains.

The thing Amy enjoys most about her Mary Kay business is building people. “It’s not just about helping them to the top, but partnering with them in their development while they stretch to reach their goals. I’m a big thinker and it’s a joy to work, but my heart is my best and worst asset. I can care too much. It’s about learning to balance the business, when to leave my heart out of it and build strong women.” says Amy of her Mary Kay vision.

“You’re not meant to blend into life. You’re meant to stand out. When you do, you give other people permission to do the same.”